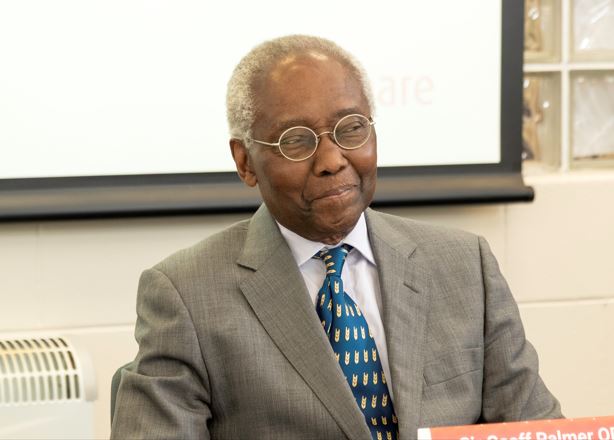 Sir Geoff Palmer, Professor Emeritus and Chancellor of Heriot-Watt University, has been selected to receive the Edinburgh Award 2022.

In recognition of his ground-breaking contributions to academia, and his indefatigable defence of human rights in Edinburgh and beyond, Sir Geoff Palmer will be presented with an engraved Loving Cup from the Lord Provost and have his handprints set in stone at the City Chambers later this year.

Sir Geoff has a long association with the city of Edinburgh, he first arrived in the Capital in 1964 to pursue a PhD in Grain Science and Technology jointly with the then Heriot-Watt College and the University of Edinburgh. Upon completion of his doctorate in 1967 he began working at the Brewing Research Foundation where he developed the industrial process of Barley Abrasion and pioneered the use of the Scanning Electron Microscope to study cereal grains. In 1977, he returned to Heriot-Watt University as a staff member and gained a DSc degree for his research work in 1985. In 1989 he became the first black professor in Scotland and remained in Edinburgh until his retirement in 2005. In 2021 he was appointed Chancellor of Heriot-Watt University.

Sir Geoff was knighted in the 2014 New Year’s Honours for services to human rights, science, and charity. In 2018, he was appointed Jamaica’s first Honorary Consul in Scotland and is the 2020 recipient of the Jamaican national honour, the Order of Distinction (Commander Class).

Between December 2020 and June 2022, Sir Geoff chaired the independent Edinburgh Slavery and Colonialism Legacy Review Group whose work has been vital in profiling the Capital’s historic links with Slavery and Colonialism in the public realm. The findings and recommendations of the Group were endorsed unanimously by councillors on 30 August and the actions they suggest will form the basis of the Council’s continued response to these key issues.

Sir Geoff will become the 16th recipient of the coveted Edinburgh Award and will join the esteemed company of previous recipients who have all contributed in their own unique way to the Capital.

It is my absolute pleasure to announce Sir Geoff Palmer as the recipient of the Edinburgh Award 2022. In a career spanning over fifty years, he has made an indelible mark on the life sciences and is a shining example to the world of Edinburgh’s academic prowess, force, and rigour.

Alongside his academic achievements Sir Geoff has been instrumental in examining Edinburgh’s past and helping us collectively move forward as a city. As chair of the Edinburgh Slavery and Colonialism Legacy Review Group he has conducted himself with absolute distinction and provided a firm foundation for Edinburgh’s future as a modern, conscious, and considerate capital city.

The Edinburgh Award, nominated by the public, identifies individuals that have made an extraordinary impact on our capital city. Sir Geoff has contributed substantially to the betterment of this great city, and I am confident that his legacy both in academia and activism will live on for many years to come.

This award is more than a great honour; it is a recognition of all the people whose goodness has contributed to my life and work. I arrived in Edinburgh as a research student in 1964 and I thank the City of Edinburgh Council for all it has done for the community.

Professor Sir Geoff (Godfrey) Palmer was born in Jamaica in 1940. He migrated to London in 1955 and unexpectedly had to return to school because he was one month younger than the school leaving age of 15 years. He was designated ‘educationally sub-normal’ and attended a Secondary Modern School. In 1958 he secured a job as a Junior Laboratory Technician at Queen Elizabeth College where Professor Palmer ‘changed’ his name from Godfrey to Geoff and assisted his entrance to Leicester University in 1961.

He sits on the Boards of Community Organisations and has received Honorary Degrees from various academic institutions. His awards include an OBE (2003) and Knighthood (2014) for his scientific research, charity, and human rights work. He was the fifth recipient and the first European resident to gain a distinguished research award from the American Society of Brewing Chemist. His work on the history of the enslavement of African people as British slaves has led him to work on slavery projects with Glasgow University and to chair projects set up by The City of Edinburgh Council, the Scottish Government on Museums and The University of Edinburgh. In 2021 Leicester University gave him its Diversity and Inclusion award as part of its 100 years old celebrations. He has published books on race relations and cereal science and technology. He is the first Honorary Consul for Jamaica in Scotland and the Freeman of Midlothian. In 2021 he received the Pride of Scotland’s Lifetime Award and in 2022 he was made an Honorary Keeper of the Quaich by the distilling industry.