Peter Howson at 65: A retrospective 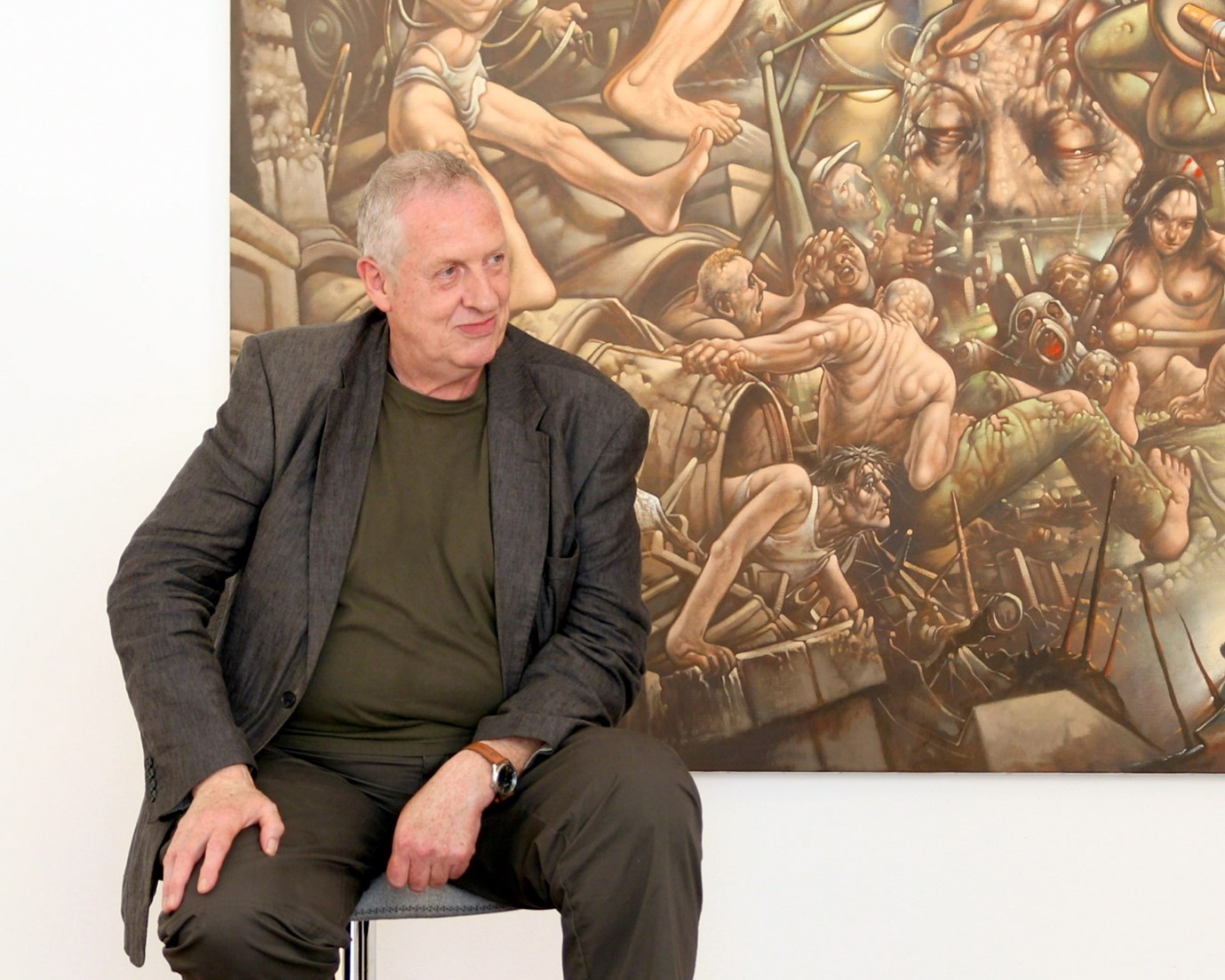 A major retrospective of one of the UK’s leading figurative painters, Peter Howson, opens at Edinburgh’s City Art Centre in May 2023.

The exhibition will bring together around 100 works spanning the artist’s career, many never seen before in Scotland.

Howson has established a formidable reputation in the art world. His heroic portrayals of the mighty and the lowly confront subjects of human conflict and destruction that offer a penetrating insight into the human condition.

His experiences of abuse—whether self-inflicted and substance-related, or the traumatic events of his childhood—have moulded his world view, and afforded him an affinity with individuals on the margins of society.

The City Art Centre’s Curatorial and Conservation Manager, David Patterson has been planning the exhibition since 2019, working closely with Howson and his London gallery. Howson has previously shown at the City Art Centre, when his critically acclaimed solo exhibition devoted to Scotland’s patron saint Andrew was displayed in 2007.

This is a once-in-a-lifetime opportunity to see works assembled from public and private collections. This retrospective will illustrate Peter’s consummate skill in a range of media and explore his religious work as well as his graphic responses to recent global events including the covid pandemic and war in Ukraine.

Peter Howson is one of the most respected artists of his generation and we are very proud that the City Art Centre will host this major study of his work. Visitors will be able to discover Howson’s instantly recognisable works with many on display in Scotland for the first time. Celebrating Howson’s 50-year career, we will showcase over 100 pieces across four floors. It will be the highlight exhibition of 2023.

Emerging from Glasgow School of Art in the 1980s, Howson quickly proved his skill of capturing the maverick, the excessive, the non-conformist and his own personal understanding of the struggles of everyday life.

In 1992 he was commissioned by the Imperial War Museum to record the conflict in the former Yugoslavia. He was appointed official British war artist for Bosnia in 1993 and in 1996 was awarded Doctor of Letters at The University of Strathclyde. His work is included in numerous national and international museum collections.

When the Apple Ripens: Peter Howson at 65: A Retrospective opens at the City Art Centre in Edinburgh on 27th May 2023 and runs until 1st October 2023. A new book will accompany the exhibition, published by Sansom and Co.

Tickets can be purchased in advance on the Museums & Galleries Edinburgh website.

Peter Howson OBE was born in London in 1958. He was a focal member of the group of young artists to emerge from the Glasgow School of Art during the 1980s dubbed the New Glasgow Boys, and one of his generation’s leading figurative painters. He studied at Glasgow School of Art from 1975 - 1977, and returned in 1979 to complete a Masters degree. In 1985 he was made the Artist in Residence at the University of St Andrews and also a part-time tutor at Glasgow School of Art. Howson witnessed the harrowing realities of combat as an official war artist appointed by the Imperial War Museum during the Bosnian War from 1993-4, culminating in a solo exhibition at IWM London in 1994. In 1996 he was awarded Doctor of Letters Honoras Causa, University of Strathclyde. Howson has exhibited extensively in the United States and Europe. His work is represented in public collections including the Metropolitan Museum of Art and the Museum of Modern Art, New York; the Tate Gallery, London; the Victoria & Albert Museum, London; the British Museum, London; Gallery of Modern Art, Glasgow; and the Scottish National Gallery of Modern Art, Edinburgh. Howson currently lives and works in Glasgow.