In photos, The Queen’s visits to Edinburgh

Throughout her life, The Queen showed great appreciation for her ancient and hereditary kingdom of Scotland, making countless visits to Edinburgh and staying at her Royal Palace of Holyroodhouse.

As we reflect on the events of the past week, the city of Edinburgh has played a key role in the aftermath of the passing of Her Majesty and the welcoming of our new sovereign King Charles III.

In death, just as in life, Scotland’s capital city has served Her Majesty and the Royal Family faithfully and allowed residents and visitors alike the opportunity to pay their final respects. Her Majesty was a leader who stood steadfast in service for seven decades, in which time she made many trips to Edinburgh which we remember with great fondness. I am immensely proud of the work undertaken by Council colleagues, partner agencies, and volunteers which ensured that Her Majesty’s final journey to Edinburgh befitted the great legacy which she leaves behind. I would also like to pay tribute to the people of Edinburgh who showcased the very best of our great city.

Here, as Edinburgh mourns the late sovereign, we take a look at many of the famous visits she made to her beloved Scottish Capital in the earlier period of her reign and as a Princess. 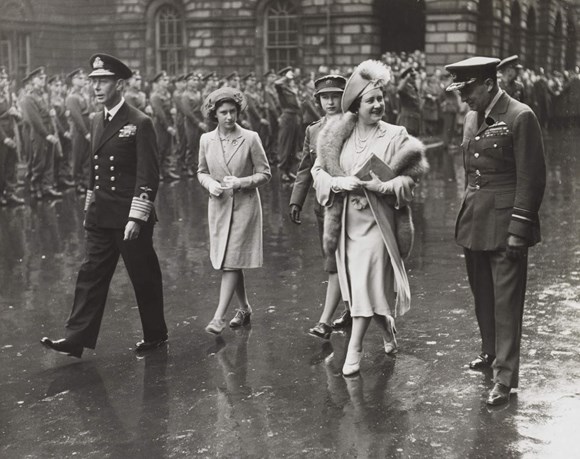 In 1945, a young Princess Elizabeth and her sister Princess Margaret joined their parents King George VI and Queen Elizabeth on a two-day visit to Edinburgh.

It marked a national celebration of final victory in World War II and included a march-past in Princes Street by Forces of all categories. Crowds lined the streets to watch the Procession.

Later, the Royal party made a late-night tour to observe celebratory bonfires and firework displays. The visit also included several Investiture ceremonies at the Palace of Holyroodhouse as well as a service at St Giles' Cathedral, before they continued on to other parts of Scotland. 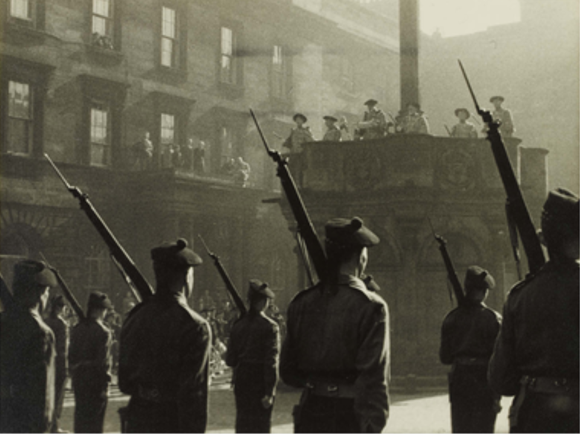 Ten years later, in 1952, when a Guard of Honour lines up in rows in front of the Mercat Cross on the High Street.

The soldiers wear caps and hold rifles with bayonets over their shoulders. Dignitaries and officials wearing ceremonial dress, which would have included then Lord Provost James Miller,surround the area and stand on the platform of the Mercat Cross to address the assembled crowd. 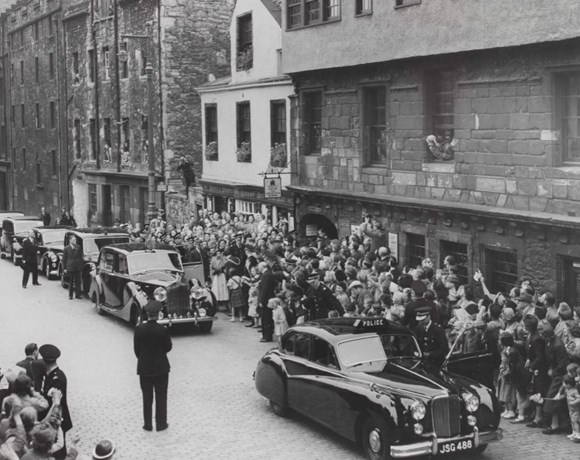 A large crowd also gathered on either side of the street in the Canongate to catch a glimpse of The Queen. A row of polished black cars are parked outside the building which now houses our Museum of Edinburgh. The young Queen can be seen wearing a hat and a fur wrap over her dress as she talks to an official beside the open door to her awaiting car. 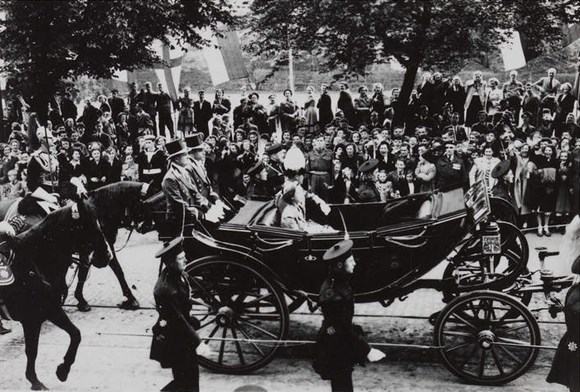 CREDIT: (As above) Queen Elizabeth II in procession with Honours of Scotland, 24th June 1953; artist May. E; image from Capital Collections.

The next year witnessed The Queen's Coronation celebrations in Edinburgh. Edinburgh prepared for the state visit of the Queen and her husband, the Duke of Edinburgh, which took place from Tuesday 23 until Monday 29 June 1953. The city was decorated for the occasion and a large programme of events was planned.

The Royal party arrived at Princes Street Station at 10am and made its way to the Palace of Holyroodhouse. A map was produced showing the routes of the processions on each day and crowds of people, including many children, lined the streets to watch the pageantry. 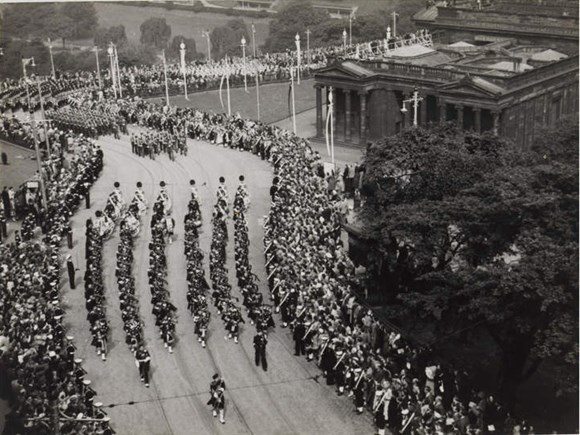 CREDIT: (as above) Queen Elizabeth II in procession with Honours of Scotland, 24th June 1953; artist May. E; image from Capital Collections.

A military parade marches up the Mound past the National Gallery in Edinburgh. Crowds of people stand on both sides of the road to watch the spectacle. Military personnel in naval uniform stand at the edge on either side of the road and separate the spectators from the procession. Tall poles with banners attached have been placed at regular intervals in the grounds of the gallery along the route of the procession. 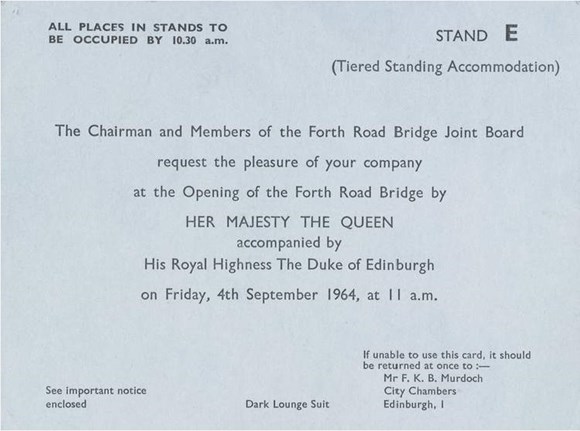 CREDIT: Invitation to the opening of the Forth Road Bridge, 1964; artist unknown; image from Capital Collections.

Over a decade later in 1964 when the Forth Road Bridge was formally opened by the Queen after six years of construction. The bridge was built to respond to increasing volume of traffic. Prior to the bridge, the nearest crossing was the Kincardine Bridge upstream, or a ferry service linking North and South Queensferry.

Paper invitations provided access to the formal opening of the Forth Road Bridge by The Queen on 4th September 1964. The invitation gives other information about attendance, dress code and timings and is on display in our Queensferry Museum. 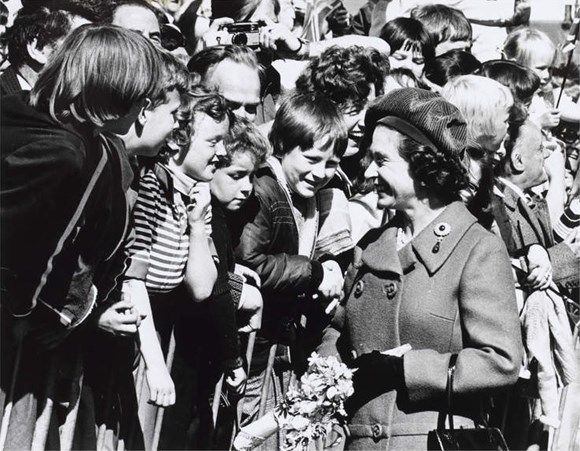 Above, The Queen smiles as she greets a crowd of people in Craigmillar. She is talking to some local children and is holding a small bunch of flowers. 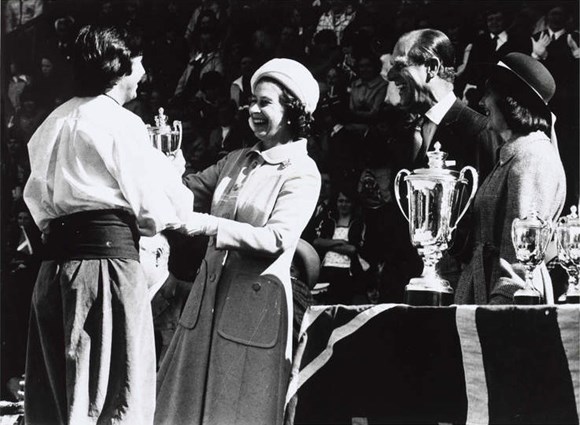 The Pageant of Scottish Youth at Meadowbank Stadium took place during the visit. The Queen attended for the presentation of the open section prize to the Ukrainian Youth Association of Great Britain Dance Team. 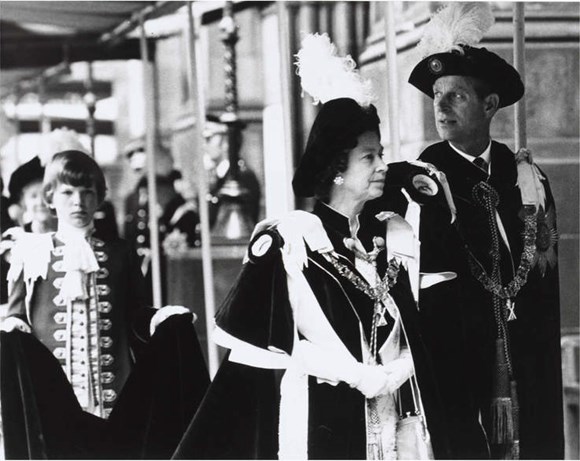 The Queen and The Duke of Edinburgh walk along a covered walkway for the Order of the Thistle service in St Giles' Cathedral. They both wear ceremonial robes and chains around their necks, and black caps with large white feather plumes. The train from the Queen's gown is held up by a page boy who is walking behind her. 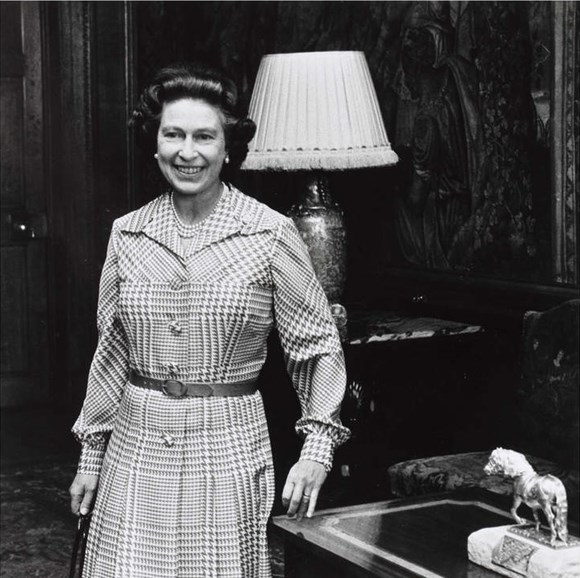 CREDIT: Silver Jubilee Visit, May 1977: Queen Elizabeth with a silver model of Cruachan, the mascot of the Argyles; artist unknown; image from Capital Collections.

The Queen is pictured during the Silver Jubilee tour at her Edinburgh home, the Palace of Holyroodhouse. 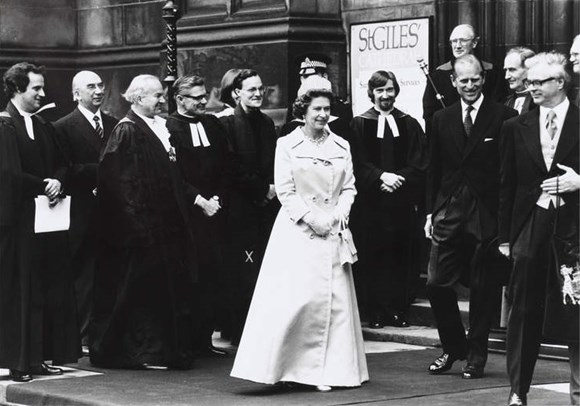 The Queen stands outside St. Giles Cathedral in Edinburgh. She is wearing a long pale dress coat, surrounded by members of the clergy and various other dignitaries. Prince Philip stands to one side smiling. A policeman can be seen in the background. 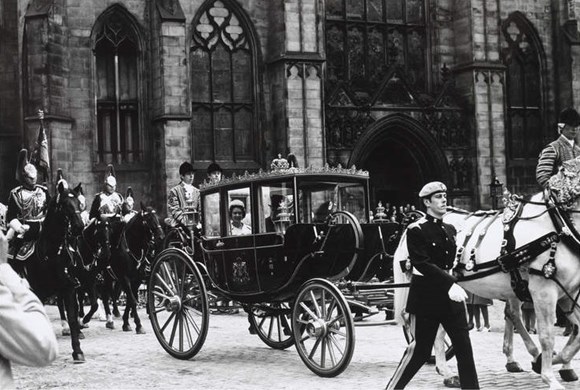 The Queen can be seen smiling inside a ceremonial carriage led by white horses, followed by a ceremonial cavalry regiment. Two footmen sit on the back of the carriage. In the background can be seen the facade of St. Giles Cathedral and the heads of some of the members of the crowd.

All images credited to Capital Collections.