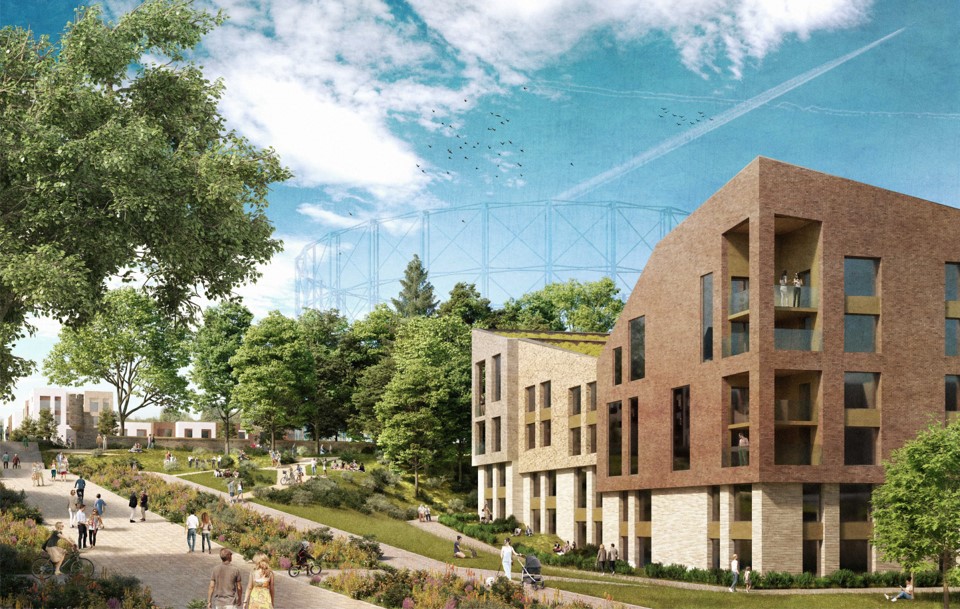 The creation of a £1.3bn well-connected, sustainable new coastal town at Granton Waterfront in Edinburgh has reached its next major milestone.

Following a competitive procurement process, the City of Edinburgh Council has announced the Cruden Group as the preferred bidder to take forward the first phase of the Council’s ambitious outline business case to regenerate the area. It is hoped the contract will be signed by both parties in the coming weeks.

In the next couple of years, the Council will work in partnership with Cruden to take forward pre-development works including detailed designs for around 750 net zero homes for sale and rent, commercial space, new and enhanced sustainable transport infrastructure and public realm which will connect the surrounding neighbourhoods with the Waterfront. The first phase of the project will also see the delivery of a new school and medical centre.

In addition, the Council will also work with its new development partner to bring forward a low carbon energy solution for the first and future phases of the project contributing to its target to reach net zero emissions by 2030.

The Cruden Group is set to bring on board local award-winning architects Smith Scott Mullen. Leading Scandinavian architects C. F. Moller also earmarked to work on the project with Cruden bringing their extensive international experience in delivering large scale coastal regeneration. They will set extremely high standards using exemplary design to help to develop a blueprint for the Capital’s 20 minute neighbourhood model, making sure those who live in the area have all the facilities they need including workspace, retail and cultural opportunities close to home.

It’s fantastic news that we can now look to pushing forward on the first phase of our major regeneration at Granton Waterfront with our development partner to transform the north of the city for people living there now and for future generations to come.

This is the largest regeneration project of its kind in Scotland and it’s giving us a once-in-a-lifetime opportunity to transition towards a greener economy in our Capital city while building many of the affordable homes Edinburgh needs within 20 minute communities with shops, healthcare, cultural and leisure and education facilities all nearby.

As Granton Waterfront is one of the seven strategic sites within the Edinburgh and South East Scotland City Region Deal it will build on Scotland’s vision for achieving net zero, placemaking and people-led growth.

We’ve been consulting with local people at every stage of this project. I’ll make sure this continues when the development partner comes on board with jobs for local people and wider community benefits as well as providing new high quality net zero affordable homes with integrated facilities and public space that communities want and need nearby.

This new approach to urban development is transformational and will provide a blueprint for the future as we reconnect the Capital to the Firth of Forth and create a new coastal neighbourhood which will become one of Europe's largest coastal amenities.

Great progress is already being made with early action projects at Granton Waterfront with over 500 net zero affordable homes currently under construction at Western Villages off Marine Drive and a further 75 being built behind the former Granton Station building. There are also three commercial units fronting onto Waterfront Avenue under construction as well. These projects will all bring new and enhanced active travel routes as well as new quality public space.

A further 142 additional homes planned for Silverlea are currently waiting to be considered by planning.

There has also been positive progress in growing a cultural and arts cluster in Granton Waterfront. Last year we announced the start of works to refurbish the former Granton Station building into a creative work space with a lease being given to leading Scottish arts Charity Wasps, and arts charity Edinburgh Palette has been granted a lease in our vacant industrial unit on West Shore Road.

The iconic Granton Gasholder is now also illuminated every night for the remainder of this year, a beacon of light for the project following a joint initiative with Edinburgh College. It is currently lit up to show solidarity with Ukraine in the colours of the country’s flag.  Refurbishment of the gas holder and creation of public amenity space, part-funded through the UK Government’s Levelling Up Funding, is due to start on site at the end of this year to be completed mid-2024. This project will bring space for learning, events and play, bringing this iconic structure back to life.

Just three miles north of Edinburgh’s City Centre, Granton Waterfront has a rich industrial history and maritime  heritage. With outstanding views across the Firth of Forth, Granton Waterfront sits in a ‘necklace’ of coastal communities from Cramond in the West to Portobello in the East. Granton is one of Scotland’s largest brownfield sites and one of its most dramatic urban coastal green spaces. It presents an opportunity to spearhead the city’s response to the climate emergency, with an ambitious vision that can truly change the way people go about their daily lives.

Scotland’s ambitions to tackle climate change and transition to a net-zero-carbon economy are fundamental to the Granton Waterfront vision. With six public sector partners including two major national institutions, it is a unique collaborative venture. All are committed to maximising every opportunity to ensure the economic benefits of the development are shared fairly throughout the community.

Together, our aim is to ensure the local economy grows in an inclusive, resilient and considerate way - one which has people’s health, happiness, and wellbeing at its core. Granton Waterfront will be the blueprint project for Scotland in urban development and regeneration.