Draft strategy sets out how Edinburgh will strive to become a climate ready, net zero Capital by 2030 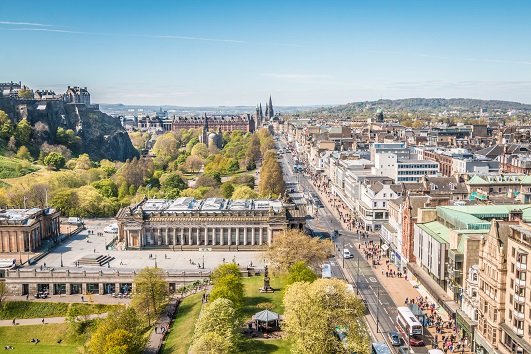 The Council has set out a city-wide approach to reducing Edinburgh’s greenhouse gas emissions as part of new plans being considered by Councillors to tackle climate change in the Capital.

It will call on residents, community groups and private, public and third sector organisations to work collaboratively to achieve the city’s ambitious climate goals.

Published today (Friday), ahead of World Environment Day (June 5th), the Draft 2030 Climate Strategy sets a series of clear and practical steps Edinburgh will take to combat and adapt to climate change and reach its target of net zero emissions by 2030.

If the draft strategy is approved, a twelve-week online public consultation will kick off on Monday 14 June, seeking views from people and organisations all over the city on the draft strategy and on actions residents and businesses can take to tackle climate change.

The Climate Strategy, which follows on from the Council declaring a climate emergency in 2019, focuses on creating the right policy, regulatory and infrastructure conditions in the city to support net zero behaviour change.

It also lays out key areas where collaboration and partnership will be supported to deliver on Edinburgh’s climate targets.

And it further outlines how people, communities, businesses and organisations in Edinburgh can be supported and encouraged to take climate action – and stresses the need for everyone to work together to invest in a better future for the city.

The draft strategy, which will be discussed by members of the Policy and Sustainability Committee on Thursday 10 June, includes commitments to:

Within the strategy, the Council is leading by example by committing to:

In the year that Scotland hosts COP26, the world’s eyes will be on Scotland, and on Edinburgh as its capital and we want to ensure this leaves a legacy of action to address the climate emergency.

This strategy will help our businesses, public sector and organisations and residents across our communities reduce or remove their carbon footprint.

Importantly it also lays out how will come together as a city to collaborate on action at the scale and pace we need to get to net zero by 2030. This includes our strategic partnership with SP Energy Networks which will ensure investment in the city’s grid has maximum benefit for our infrastructure plans and for businesses and residents alike.

It’s only by working together as Team Edinburgh and with partners beyond that we can achieve the green future we need.

This strategy aims to create the right conditions to unlock the opportunities that climate action presents, creating jobs and a more sustainable economy while we preserve our amazing Capital City for future generations.

Research shows that we could get over 60% of the way to net zero with actions that pay for themselves within seven to twelve years. And while we don’t have all the answers today, we will be relentless as a city in our pursuit of a better greener net zero future for this city and its people.

It is great to see that organisations across the city have their own sustainability plans and programmes of activity that are reducing the city’s emissions and that Edinburgh’s communities and citizens, and especially our young people, have a strong track record of climate action.

But we must all go further and faster - and we can only do that through a joined-up collective effort.

I encourage everyone in the city to take part in the consultation and to have their say in the proposals. Every positive action we take now will have a 10 times greater positive impact than if we waited to take these actions in 2030.

Next steps for the draft 2030 Climate Strategy

If approved by the Policy and Sustainability Committee next week, a 12-week public consultation on the draft strategy will begin on Monday 14 June. This will form the basis of a finalised strategy which would be brought to Committee later in the year alongside an implementation plan and initial cost analysis.

The launch of the City of Edinburgh Council’s draft 2030 Climate Strategy is the start of an exciting conversation for the city as it maps out the decisions we need to take to help tackle climate change in the capital.

We know this topic is of huge concern to the people who live, work and visit this city and, with the eyes of the world upon Scotland  later this year with COP26, this strategy is an opportunity for Edinburgh to lead the way in taking bold action to tackle climate change and reducing the impact of harmful greenhouse gas emissions for future generations.

We’re pleased that this ambitious and long-term plan also recognises the role that tackling climate change has in improving people’s quality of life – from creating new jobs and boosting the economy, to helping reduce fuel poverty and inequalities in the city.  It is critical that the final strategy and the supporting implementation plan gives meaning to this ambition and turns it into a reality.

We look forward to responding to the consultation and urge everyone to have a say on Edinburgh’s plans.”

We fully support Edinburgh's ambition to become a Net Zero city by 2030 and today's publication of the 2030 Climate Strategy is to be welcomed as it outlines what is required of government, industry and communities to bring about the significant change that is required in this decade.

As the electricity distribution and transmission operator for Central and Southern Scotland, we take our responsibilities seriously and recognise that we have a key role to play in helping the city of Edinburgh deliver on its ambitious, but achievable, Net Zero target. We will be delighted to develop proposals for a strategic partnership with Edinburgh City Council as it is only through collaboration between government and industry that we can harness the knowledge, skills and resources we need to tackle climate change.

"Net Zero is now the prism through which we take all our business decisions, and that has been a profound change for us. It’s one of the key drivers of our decision to become a Principal Partner of the COP26 global climate change conference, which is taking place in Scotland later this year. By working with our city partners in Edinburgh we can deliver the cleaner, greener and better future we all want, quicker.

The City of Edinburgh Council is taking a leadership role in tackling the climate challenge.

Not only have we set an ambitious target to achieve net zero carbon by 2030 but the draft Climate Strategy is a clear and detailed document that outlines what needs to be done and how we all have to play our part.

Not one sector of the city can do this alone and this strategy creates the pathway to success. I commend the work done and look forward to engaging with the City of Edinburgh Council and the business community to ensure business makes a significant contribution to our net zero ambitions but also to take advantage of the opportunities to develop our green economy.

At EVOC, Edinburgh Voluntary Organisations Council, we welcome the publication of City of Edinburgh Council’s Draft 2030 Climate Strategy, not only a key milestone in Edinburgh’s journey to net zero, by 2030, while also a commitment to supporting the development of thriving local communities across the city.

There is a recognition that every citizen, community, community or third sector organisation, and company, have a role to play in achieving Edinburgh’s ambitious climate goals is hugely important.

We welcome the opportunity for the voluntary and community sector to collaborate in the development and delivery of the strategy as well as empowering the people and communities they support to get involved, and champion where its citizens are already taking positive action.

“We hope that the goals of the strategy will connect with other landmark initiatives, such as the actions and cultural change outlined in the Edinburgh Poverty Commission’s report, working to end poverty by 2030, while also enabling the developments in green skills and jobs, that are part of a recovery with wellbeing of people and nature at the heart of it.