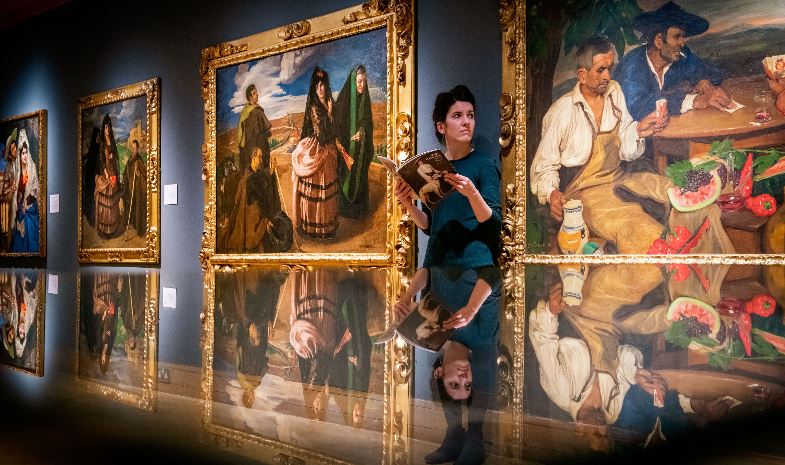 Edinburgh’s City Art Centre is to re-open its doors to the public on Saturday 12th September 2020 with a full range of new safety measures in place to ensure the safety of visitors and staff.

Having first opened its doors on 15th August 1980, heralded as combining; ‘Scotland’s largest air-conditioned fine art exhibition space, with specialist environmental and security facilities…a must for the display of world masterpieces’ – the City Art Centre celebrated its 40th anniversary this month (15th August). As the gallery doors reopen and to mark the anniversary, the City Art Centre is mounting a special ‘highlights’ exhibition, City Art Centre at 40: Highlights from the City’s art collection from the City’s collection of Scottish art. Widely recognized as being one of the finest in the country, the City’s collection numbers over 5,000 artworks ranging from some of the earliest views of Edinburgh to works by many of Scotland’s leading contemporary artists. Visitors will be able to see artworks by major historical figures such as Allan Ramsay, the pioneer photographers Hill and Adamson, and the Scottish Colourists, as well as contemporaries such as John Byrne, Alison Watt and Adrian Wiszniewski.

Bright Shadows: Scottish Art in the 1920s a new exhibition exploring the work of Scottish artists during the 1920s – an evocative period of social, political and economic change also opens on the 12th September as visitors are welcomed back to the gallery as it reopens.

The forthcoming exhibitions mark the public re-opening of the venue on 12th September. In keeping with Government advice in order to protect and maintain the safety of our visitors and staff, the City Art Centre has introduced a range of new safety measures and procedures throughout the venue, including a one way system, installation of screens at reception, hand sanitiser stations, extra barriers and signage and staff will of course be wearing masks while offering visitors a very warm, socially distanced welcome.

Visitors are asked wear face coverings and to pre-book free tickets for allocated time slots in advance via edinburghmuseums.org.uk

Over the past 40 years the City Art Centre has housed over 500 exhibitions, shown priceless treasures from across the world to priceless paintings made by Edinburgh children and welcomed 100,000’s of visitors through its doors and is now a well-established, respected and cherished Scottish cultural resource.

Other activities marking the 40th anniversary in the coming weeks include; The City Art Centre is 40!, a curated a digital exhibition of much-loved and favourite paintings chosen by past members of staff, artists and people closely involved with the City Art Centre over the years presented via Art UK’s ‘Curations’ series. Tessa Asquith-Lamb, one our best-loved local artists, has created two special videos with the City Art Centre’s Public Programmes section to celebrate the milestone, featuring the artist’s favourite painting, 'Tristan and Isolde' by John Duncan. Asquith-Lamb tells us why Tristan and Isolde is so special, and demonstrates a special art activity everyone can do at home while we are not able to visit the gallery in person.

Having moved from its original home at The Royal High School on Regent Road to make way for the intended Scottish Assembly following Scottish Devolution, the City Art Centre found a new home in a purposefully refurbished five storey warehouse dating back to 1899 on Market Street, which was designed as an extension to The Scotsman building on North Bridge, having once housed the city’s fruit markets. The building was selected not only because of its architectural significance but also for its wrought iron framed structure which made it suitable to carrying the heavy floor loads required to house large volumes of visitors. As part of the significant renovation project, the building’s original stonework and metal frame windows were preserved, while the interior was repurposed to create four new gallery spaces, artist studios and a licenced café, designed to reflect the building’s late Victorian origins alongside minimal natural décor, complimented by a state of the art lighting system to protect the delicate works on show. The City Art Centre was designed to be ‘more than just a gallery’, providing studio and meeting spaces for artists, ‘craftsmen’ and for the people of Edinburgh.

The City Art Centre first opened its doors on 15th August 1980 with two major exhibitions as part of the Edinburgh International Festival – The Legacy presenting historic and contemporary Canadian/Indian art from the Provincial Museum in British Columbia and an exhibition by the Prescote Gallery near Oxford, showing outstanding examples of British Craft. Since that day, the City Art Centre has housed many hundreds of exhibitions and has continued to work with the city’s festivals; including The Edinburgh Festival Fringe, International Festival, Edinburgh Art Festival, The Edinburgh Jazz and Blues Festival and Edinburgh Science Festival.

From 1985 onwards, the City Art Centre’s programming expanded to reflect many new threads and artistic disciplines, ranging from photography; Cecil Beaton (2004) Ansel Adams; Snowdon; Albert Watson (2006) and Coming into Fashion (2013) alongside major survey and group shows championing Scottish art and craft; Hand, Heart and Soul (2007), Window to the West: The Rediscovery of Highland Art (2011) and A-Z: An alphabetical Tour of Scottish Art (2014).

As the City Art Centre’s exhibition programme and audiences grew, remaining rooted in the city and its people was key, with exhibitions and works often reflecting Edinburgh’s history as well as local and global social issues such as; Anne Frank in the World (1987), Chernobyl – The Legacy (1993), Rainbow City (2006), Leith – The Turning Tide (1987), Edinburgh Re-discovered: Thomas Begbie (1990) and Robert Blomfield (2018).

The City Art Centre’s now well-established reputation as a key cultural Scottish institution is evidenced in its 40-year exhibitions history and audience loyalty. As well as an ambitious and ever-changing exhibitions programme, an additional vital aspect of the City Art Centre is its role in housing the City’s Collection of Scottish Art – one of the finest in Scotland. The collection, which supported through donations, bequests and gifts as well as purchases, features works from many of ‘The Glasgow Boys’ as well as the Scottish Colourists – John Duncan Fergusson, Samuel Peploe, Francis Cadell and Leslie Hunter. Some of the best-known artists of the Edinburgh School, including William Gillies, John Maxwell and Anne Redpath, all have several works in the collection, and featured post-war artists include Alan Davie, Eduardo Paolozzi, Elizabeth Blackadder and John Bellany. The contemporary collection includes artists such as Christine Borland, Callum Innes, Rosalind Nashashibi and Toby Paterson.

When the City Art Centre reopens and looks forward to the next 40 years, the continued focus will be to champion historic and contemporary Scottish visual art and craft. The City’s art collection continues to grow, and going forward the curatorial team will actively seek to diversify the collection in the coming years to better reflect the range of artists and work being produced in Scotland today. Visitors will be able to see the fruit of this with a new exhibition of recent acquisitions next year.

Since we opened in 1980, staff at the gallery have worked with artists who live in some of the most densely populated cities on the planet as well as others who live in some of the remotest places on earth. We’ve tackled global tragedies and local issues, and shown paintings, drawings, watercolours, sculpture, tapestry, photography, silver, glass, interior design, film and installations among many other media. We’ve displayed works made from ice, oil, wood, metal, matchsticks, coat hangers, parachute fabric, nylon, gold, even old welly boots!

We are thrilled to be reopening on the 12th September, and fittingly with two exhibitions drawn from our Scottish art collection. In the months and years to come, we’ll continue to shine the spotlight on Scottish artists of the past who have been overlooked in the story of Scottish art as well as curate major displays by some of the country’s leading artists past and present. The topography and people of Edinburgh will remain a consistent strand in our programming, as will the display of the finest contemporary and historic applied art and craft. We’ll continue to work with our partners Edinburgh Science Festival to bring some of the best Science and Art to a family audience, and our wonderful collection will continue to be shown throughout the year in a series of temporary exhibitions.

Having been in at the birth of the City Art Centre, I am immensely proud of the myriad exhibitions it has sourced from all parts of the globe, and from its own important fine art collection. This remarkable achievement has been due to the creativity, commitment and hard work of its staff, past and present, which I hope will continue long into the future.

I can’t be dispassionate about the City Art Centre. I started working there on Monday 5th November 1984, my 31st birthday, and stayed for 30 years. We put on the most fantastic exhibitions and built up the most brilliant collection of Scottish art. In retrospect, it all feels truly amazing – what we managed to do and how hard we all worked. People came and loved it and kept coming back. It remains a fabulous place, still with loads of potential. In these challenging times, Edinburgh is truly lucky to have it. Here’s to the next 40 years!

Over the last 40 years our City Art Centre has hosted more than 500 exhibitions, housed works from across the globe and welcomed hundreds of thousands of visitors. As we celebrate this milestone it’s a great opportunity to look back at our favourites over the years as well as look ahead to reopening our doors on September 12th.

Our collection of Scottish art is one of the finest in the country and this special ‘highlights’ exhibition is a fantastic way to celebrate the past 40 years as well as welcome our community back. We wanted to mark this significant anniversary of a very special place and celebrate the city’s artistic collections in a safe way when we open our doors and gather together again.

When it opened in 1980 the City Art Centre was designed to be more than a gallery, providing studio and meeting spaces for artists, craftspeople and art lovers. I’m very much looking forward to the exhibition and to welcoming visitors back when we reopen next week.