As part of our support for business package, we have commissioned a series of small murals to be painted on utility boxes on Leith Walk and Constitution Street. Working alongside Vue Arts and Tactical Media, the project will help exhibit the work of local aspiring and established graffiti and street artists. 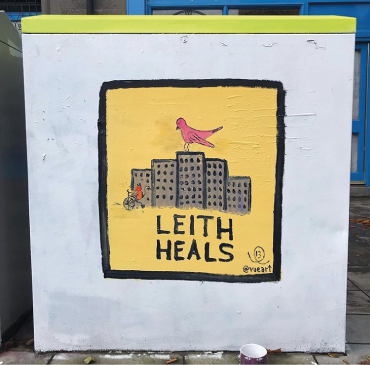 Leith Heals is part of a larger body of work by Breeze Thirteen called Pigeon City, he is inspired by the tower blocks and pigeons he sees everyday on his way around Leith. In particular the Banana Flats, Linksview and Kirkgate. The Foot of the Walk is often filled with pigeons. He is now developing a new theme around the rats that are also part of everyday life in Leith. So he has included a rat on a bicycle in Leith Heals (a nod to the Leith Cycle Shop on Balfour St). Some of his Pigeon City work was included in the Out of Sight Out of Mind exhibition at Summerhall this time last year. The black paint Breeze Thirteen used in Leith Heals he inherited from a friend who sadly died recently and he wanted him to live on in this painting. 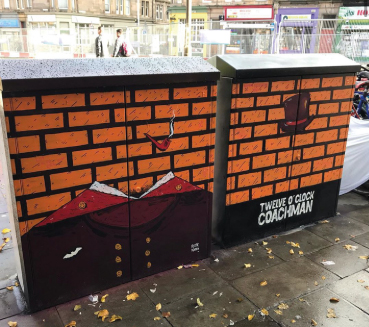 Vincente has been inspired by the tale of the 12 o'clock coachmen who haunts Tolbooth Wynd. 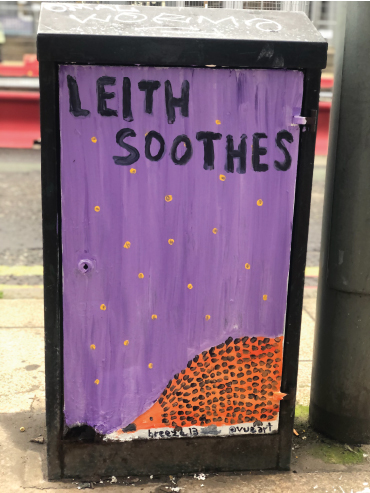 Breeze Thirteen's inspiration came from Leith being a cool place to be and that the area soothes him, plus he’s yet to meet a hedgehog that puts him in a bad mood.

He used special luminescence in the paint so it should have a gentle glow at night so people can still see the hedgehog family in the dark. He wanted it to be experienced differently during day and night times.

More Than Streets and Buildings

This piece is a bird's eye view of (most of) Leith, with a wee slogan at the bottom. The internal sections are made of smaller lines to differentiate them from the main roads of Leith Walk, Easter Road and Pilrig. 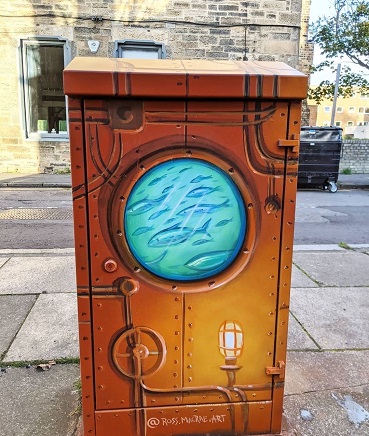 Ross's underwater scene is inspired by Leith's famous docks. You can find this piece on Manderston Street. 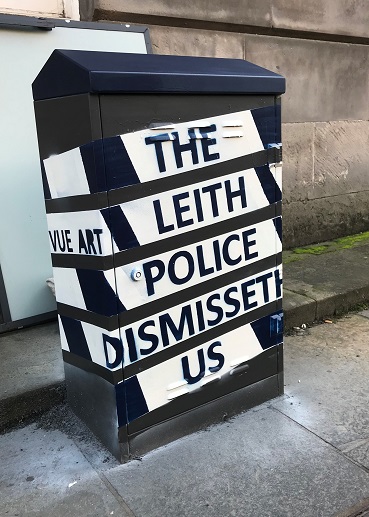 The police box was inspired by the location of the box (outside the police station on Constitution St) and the tongue twister The Leith Police Dismisseth Us. The rhyme has a great history and was used by the Leith Police to test the level of people’s inebriation!

Ooft has lived in Leith for the last 15 years and creates socially conscious art with community groups most recently with the Criminal Justice Social Work Service. 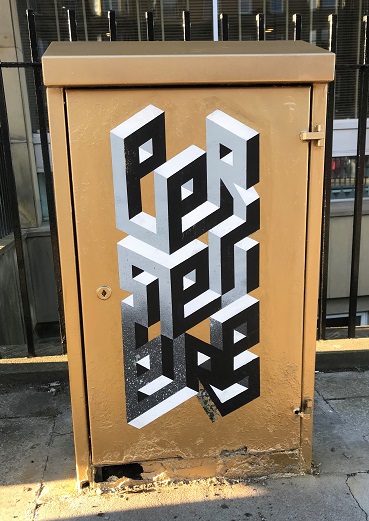 This one really has been a labour of love, Keith has preserved in all weathers to get this done! You can find this piece on Leith Walk. He had this to say about his latest creation...

I decided to go with 'Persevere' as the theme since it is the Leith motto and having lived in Leith for nearly 2 decades, I think it is definitely a part of the character of Leithers old and new. It kind of seeps into you once you live here for a while. We have certainly been testing our perseverance through lockdown and now as we try to return to some sort of normality. 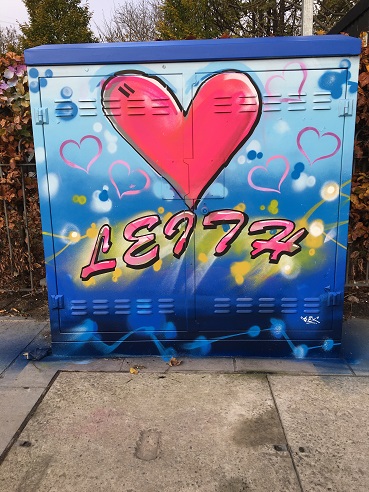 Trench, who is known for his skeletons, was inspired by the skeletons discovered in the dig on Constitution Street. This box is at the end of Links Lane, just along from the site. He also wants to encourage people to look after their own and other people’s health and well-being in challenging times. 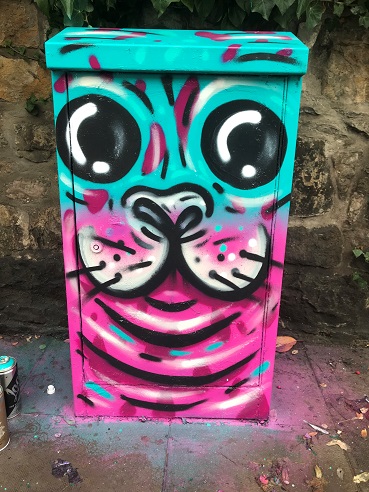 Painted by KMG, 'The Sea Lion' has an amazing back story. In 1924 three sea lions escaped from Edinburgh Zoo and were found in the harbour at Leith, this piece is inspired by their great escape! 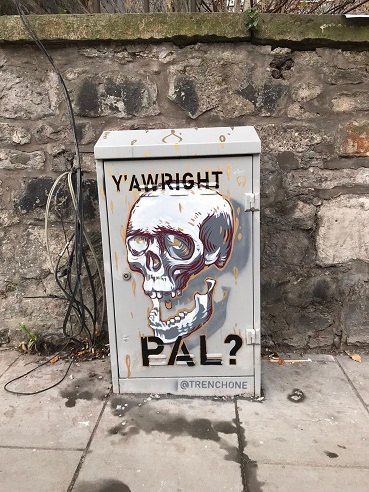 Trench, who is known for his skeletons, was inspired by the skeletons discovered in the dig on Constitution Street. This box is similar to his earlier pieve 'You OK Hun?' at Links Lane. He also wants to encourage people to look after their own and other people’s health and well-being in challenging times. 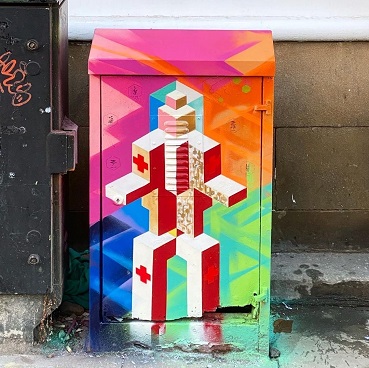 Local artist Keith Paton had this to say about his latest piece.

In the 1760s, the Kings Garden, Edinburgh’s World leading Physic Garden, moved from Holyrood Palace to Haddington Place on Leith Walk. Occupying five acres between Annandale Street and McDonald Road, it incorporated the Botanic Cottage, which was on Leith Walk until 2008, when it was moved brick by brick to the modern Royal Botanic Gardens at Inverleith Row. The Botanic Cottage was a medical school, teaching Physicians, Surgeons and Apothecaries in the horticulture, preparation and use of medicinal plants and herbs.

In my ‘Clark Kent’ day job I work for Canon Medical Research Europe, an innovative medical technology company that has been in Leith (at Anderson Place) for more than 20 years. The company started out as Voxar, a pioneer of 3D medical imaging technology. Today it is a centre of innovation researching and enabling the use of Artificial Intelligence for many medical applications.

Situated outside the British Red Cross shop, this mural is also connected to an organisation that provides support and aid to people in need all over the world, particularly in conflict zones. Delivering medicines, food, healthcare and other aid directly to millions of people in desperate circumstances.

Hence the title of this piece, with its connection to medicine, past, present and future. 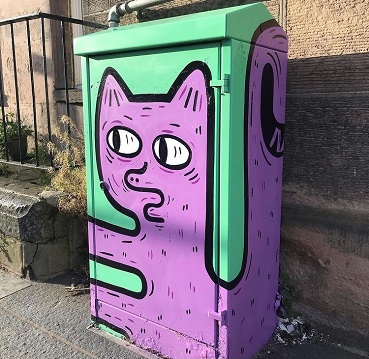 This is the second mural painted by KMG as part of the Support for Business mural project. The artist was inspired by the Leith Witch Trials and the story of Agnes Sampson. Agnes Sampson was accussed of sinking a dead cat in the waters of Leith to cause a storm that killed Jane Kennedy and threatened the King when he sailed back from Denmark.

She's Got Some Bottle

Situated on Assembly Street, this mual was inspired by the Leith's long history of glass bottle making. The Edinburgh & Leith Bottle Co was based on Salamander St, close to the box, and an archaeological dig of the site was completed last year.

The Fairy Boy of Leith 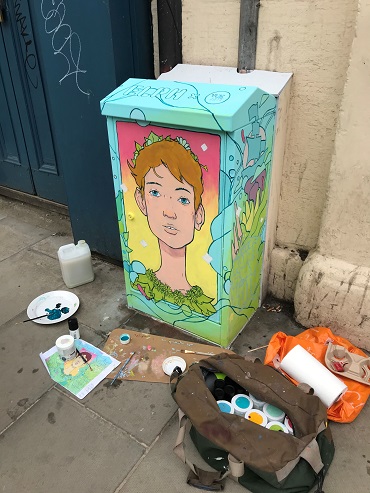 This mural titled The Leith Fairy Boy can be found outside Woodland Creatures. The artist Elph was inspired by the tale of Captain George Burton and the Fairy Boy.

Captain George Burton, whilst staying in Leith, came across a boy known locally as the ‘Fairy Boy’ who had been given the gift of second sight by the fairies. Every Thursday night, the boy would go to Calton Hill (then a remote place between Leith and Edinburgh) where he would enter the hill through huge gates, only visible to those with ‘the fairy gift’ and commune with the fairies.

At these gatherings the boy would play drums for the little folk who danced and feasted. One Thursday night, the Captain, and some acquaintances, held the boy in conversation, hoping to avert his trip to the hill, but the boy gave them the slip, but was found and brought back to the house, where upon he managed to slip away for a second time. There the story ends with most accounts stating that the boy made off to Calton Hill to once again meet with the fair folk.