Following discussions with representatives of the local community, a revised concept design for Stevedore Place and the surrounding area has been developed. 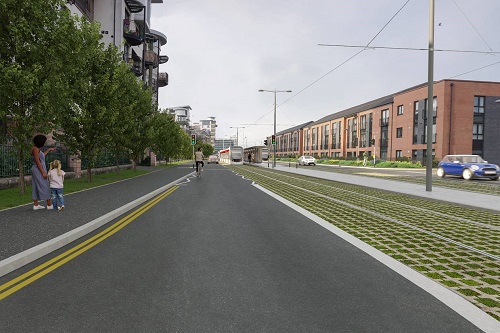 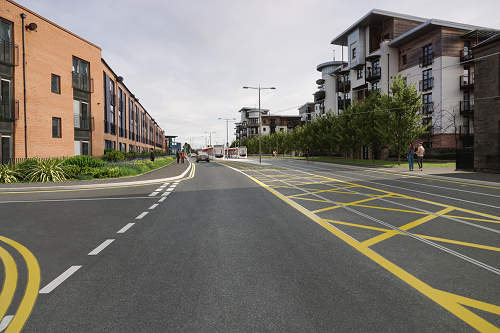 In addition, more trees will be planted outside:
Finally, sites locations for planting additional trees around Ocean Terminal have also been identified.
In order to construct the tram, the 30 trees currently situated on Stevedore Place have to be removed. The new design will see 75-80 trees planted in the area, with 55-60 in the immediate vicinity of Stevedore Place.
Keeping the existing trees in their current position is not an option given the small amount of the space to accommodate footpaths, passing lanes, trams lines going both directions and the tram stop. Following concerns raised by residents, Councillors asked the project to investigate the possibility of moving these trees and replanting them. Unfortunately this is not a viable option as the advice given from arborists stated that it would be highly unlikely that the trees would survive.
Further discussion will take place on the best species and size of tree to plant in each location, and when the best time to plant them is.

Why are the trees having to be removed?
The section of road needs to accommodate two footpaths, two road lanes, two tram tracks and a station. As a result, it is not possible to have all these in place with the trees in their current location.
Why not change the alignment of the tracks to create more space?
The track alignment in this area is restricted by the land available, proximity of the old Casino building and the required radius of the track as the tram turns into Constitution Street.  The alignment is also fixed by the location of the tram stop and the ability to have a traffic lane either side to pass stopped trams at the tram stop.
Why don’t you move the trees?
The professional advice we have received is that it is highly unlikely that the trees would survive a move and that we would be better replacing them.
As part of the Code of Construction practice, trees and greenery will only be removed as a last resort and where this needs to happen, they will be replaced on a two-for-one basis  with one of a broadly similar or agreed size and as close to the original location as possible. A maximum of 30 trees will have to be removed as part of these works and we estimate we will be able to plant approximately 55 - 60 trees in the immediate vicinity of Stevedore Place, including the five trees that were removed from the front of the Tower Street Industrial Estate on Constitution Street. Approximately 20 additional trees will be planted in two locations near the Discovery Garden at Ocean Terminal.
The landscaping designs for the whole route are being finalised. It is envisaged that these will include further tree planting around Ocean Terminal.
What type of trees will be planted?
The advice from the Council’s Parks and Greenspaces is that specimen such as a Lime tree would be suitable for the specific locations but we will continue dialogue on this ahead of planting and further information will be available in due course.
How much is this work going to cost?
Landscaping designs along the route form part of the overall £207.3m budget that was approved at Council in March 2019.
Why not put trees down the north side of the street?
Maintaining the ‘boulevard’ effect on Stevedore Place is popular with residents in the area. The project looked at putting trees on the north side but concerns were raised by residents on Stevedore Place that this would reduce the amount of light into those houses situated there. As a result, the design was amended to incorporate additional hedging next to the houses which will be no higher than 1.5 metres.
When will all these trees be planted?
The majority of these trees will be planted during the construction process as part of public realm works but we will liaise with colleagues in Parks and Greenspaces to ensure the trees are planted at the optimum time of year. Once we have further details on this we will let residents know. Some of the trees we are proposing to plant are next to a future development site so it is appropriate that we liaise with that developer to ensure we coordinate our planting with their development plans.
What engagement has taken place with residents?
The Council undertook an extensive consultation exercise in 2018 on the proposal to construction the Trams to Newhaven project. Indicative designs at that time showed the trees moving back. Following concerns raised by residents and elected members, the project engaged with representatives from the local community. On the back of that engagement, these updated designs have been developed and are being shared further.
Who will be responsible for the up-keep of these trees?
Following completion of the project, the maintenance of the new trees will be taken on by the Council.
When are the trees being removed?
In order to avoid the nesting season, the trees need to be removed before the end of February 2021.