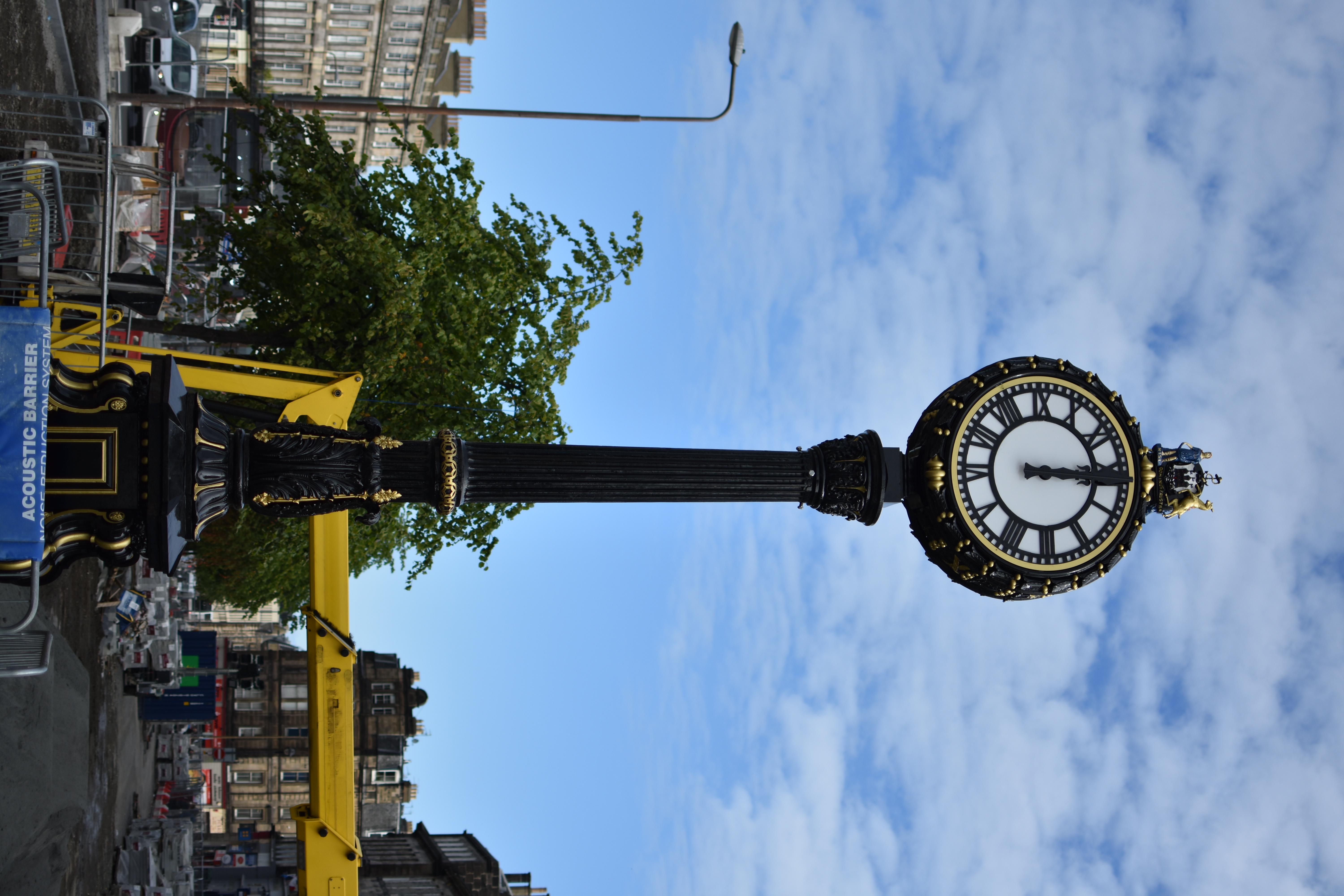 The historic London Road clock has returned home after 15 years in storage and following its full restoration, as part of the Trams to Newhaven project.

The clock, which began life on Waverley Bridge in 1857 before being moved to the West End in 1896, was eventually placed at the roundabout on London Road in 1955. It was removed in 2007 during the original tram project and is now being replaced as Trams to Newhaven nears completion.

Specialist clockmakers Smith of Derby have carefully restored the clock, which has involved dismantling it, priming and repainting all parts, hand painting ornate features in gold and repairing the Coat of Arms of Edinburgh, including casting a new deer from aluminium. Read more about the restoration process.

The timepiece was returned to Elm Row on Tuesday 16 August as part of improvements to the public space at Elm Row.

Trams to Newhaven is of significance for communities on the route, not only through delivering a sustainable, high-capacity travel option, but by making real improvements to public spaces along the way.

I’m sure the return of the London Road clock will be welcome news to many, and thanks to its full restoration it will add a striking finishing touch to the area’s transformation. It has a rich history, and I’m sure the clock has witnessed many amazing scenes in Edinburgh.

It has been fascinating to work with Smith of Derby in restoring this iconic clock back to its original condition and with a new striking paint scheme reflecting what we believe to be close to its original Victorian look.

The process has proved more complex than first thought. What was thought to be a simple iron casting in four parts has been revealed by Smith’s conservation work to be a more intricate design, with individual detailed castings added separately to the main column. Along with the Elm Row pigeons, we hope the historic London Road Clock will be enjoyed by all and add to the area’s history.

Trams to Newhaven remains on schedule for completion by spring 2023 and within the £207.3m budget, with all major construction anticipated to be complete by the end of 2022 ahead of a testing and commissioning period.

Amongst the progress made to date, 93% of track slab has been laid (over 4km), all the necessary utility diversions have been carried out and main construction work is complete on four new tram stops at Constitution Street, McDonald Road, Ocean Terminal and Foot of the Walk, with works progressing well on the Balfour Street and Port of Leith stops.

Several other monuments and public artwork pieces have been refurbished and replaced as part of the project, including the Robert Burns statute at Bernard Street, which was restored and unveiled earlier this year. In addition, the eight bronze pigeons will be returned to Elm Row this autumn, while work is ongoing to identify an appropriate location for Pilrig Cable Wheels discovered on Leith Walk.