Since 2019, the Scottish Parliament has been developing laws - Transport (Scotland) Act 2019 - to create and enforce LEZs. Working with the Scottish Environment Protection Agency (SEPA) and Transport Scotland, we have developed LEZ proposals for Edinburgh.

In 2019, we asked businesses and residents for their views on two proposals and presented feedback to the Council's Transport and Environment Committee (PDF) in October 2019. Plans to implement LEZs were temporarily paused due to the COVID-19 outbreak, but work has now restarted and LEZs will now be introduced between February 2022 and May 2022.

Your views helped to guide how we developed the proposals for the LEZ in Edinburgh. We also used detailed traffic and air quality modelling. Through this we identified three options for an LEZ

We assessed each of the options for their abiltity to improve air quality and against other objectives. The larger city centre zone was selected as the proposed boundary for Edinburgh's LEZ. You can read more about this in the report on the proposals for Edinburgh's LEZ which was discusssed at the Transport and Environment Committee on 17 June 2021. At that meeting, councillors approved to move ahead with the larger city centre zone. 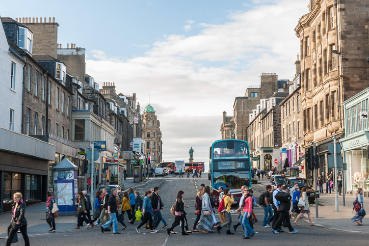